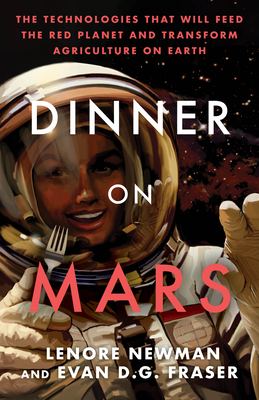 "This culinary cosmic outing is as creative as it is informative." -- STARRED review, Publishers Weekly

From Impossible Burgers to lab-made sushi, two witty, plugged-in food scientists explore leading-edge AgTech for the answer to feeding a settlement on Mars -- and 9 billion Earthlings too

Feeding a Martian is one of the greatest challenges in the history of agriculture. Will a Red Planet menu involve cheese and ice cream made from vats of fermented yeast? Will medicine cabinets overflow with pharmaceuticals created from engineered barley grown using geothermal energy? Will the protein of choice feature a chicken breast grown in a lab? Weird, wonderful, and sometimes disgusting, figuring out "what's for dinner on Mars" is far from trivial. If we can figure out how to sustain ourselves on Mars, we will know how to do it on Earth too. In Dinner on Mars, authors Fraser and Newman show how setting the table off-planet will supercharge efforts to produce food sustainably here at home.

For futurists, sci-fi geeks, tech nuts, business leaders, and anyone interested in the future of food, Dinner on Mars puts sustainability and adaptability on the menu in the face of our climate crisis.

Lenore Newman is the Canada Research Chair in Food Security and the Environment at the University of the Fraser Valley. She is the author of the acclaimed Speaking in Cod Tongues: A Canadian Culinary Journey and the award-winning Lost Feast: Culinary Extinction and the Future of Food. She divides her time between Vancouver and Roberts Creek, BC. Evan D.G. Fraser is the Director of the Arrell Food Institute at the University of Guelph. He is the author of Beef: The Untold Story of How Milk, Meat, and Muscle Shaped the World and Empires of Food: Feast, Famine, and the Rise and Fall of Civilizations. He lives in Guelph, ON, with his wife and three children.