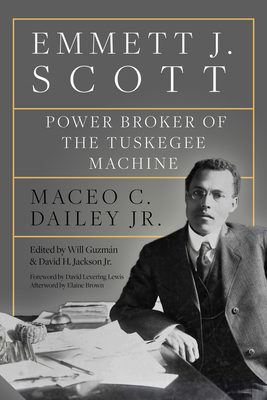 
Coming Soon - Available for Pre-Order Now
Reared in Freedmen's Town, Texas, Emmett J. Scott was a journalist, newspaper editor, government official, author, and chief of staff, adviser, and ghostwriter to Booker T. Washington. He was frequently called "the power broker of the Tuskegee Machine" he was a Renaissance man, scholar, and political fixer. However, his life has not received a full examination until now.

Built upon fifty years of research, Maceo C. Dailey's Emmett J. Scott offers fascinating detail by describing Scott's role in promoting the Tuskegee Institute. Before his death, Dailey had nearly singular access to the Scott papers at Morgan State University, which have been officially closed for decades. Readers will finally be exposed to Scott's behind-the-scenes contributions to racial uplift and will see Scott's influential role in advancing not only the Tuskegee Institute but also the Booker T. Washington agenda.

Taken together, this work of biography is an impressive reference and an essential endeavor of recovery, one that restores to prominence the life and legacy of Emmett J. Scott.