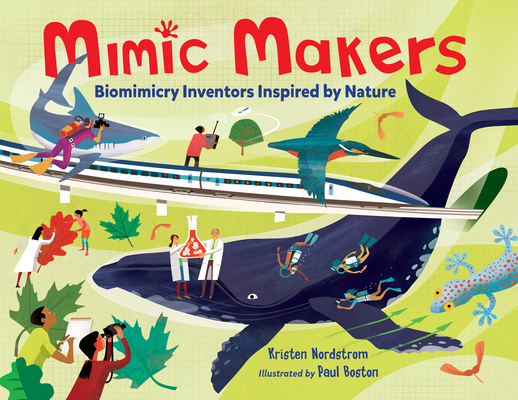 
Usually Ships in 1-5 Days
“Young readers will be captivated by the contemporary inventors and inventions featured, and inspired to incorporate biomimicry into their own designs.”
—Miranda Paul, author of One Plastic Bag and Water is Water

Who's the best teacher for scientists, engineers, AND designers? Mother nature, of course!

When an inventor is inspired by nature for a new creation, they are practicing something called biomimicry. Meet ten real-life scientists, engineers, and designers who imitate plants and animals to create amazing new technology. An engineer shapes the nose of his train like a kingfisher's beak. A scientist models her solar cell on the mighty leaf. Discover how we copy nature's good ideas to solve real-world problems!

“Mimic Makers reveals marvels of engineering inspired by nature with images that invite careful observation and explanations that are expressive, but never over simplified.”
—Kim Parfitt, AP Biology and Environmental Science teacher, curriculum developer for Howard Hughes Medical Institute Biointeractive, and recipient of the Presidential Award for Excellence in Science and Math Teaching.


“Amazing! . . . Love that the book features the scientists and inventors, and that there is a diverse set of them.
—Janine Benyus, co-founder of the Biomimicry Institute
Kristen Nordstrom is a full-time teacher at a STEAM Academy teaching biomimicry and other science topics.  This Title One, public elementary school was started by a group of dedicated teachers and one amazing principal, to bring the power of hands-on science to second language learners and socio-economically challenged students. Kristen is a member of NSTA and Mimic Makers is her first book.


Paul Boston is the author and illustrator of Map Your Way, Find Your Way Under the Sea, and several other children's books. He starts all his artwork with his trusty ballpoint pen and brings the drawings to bright, bold, busy life on his computer. www.paulboston.net
When problems arise in science or technology, nature often provides the solutions.
Nordstrom offers eight case studies as evidence. Among them are the observations of diving kingfishers that led Nakatsu Eiji to redesign the noses of the Japanese Shinkansen bullet trains for better aerodynamics, of serrated humpback whale fins that inspired Frank Fish to develop quieter wind turbine blades, and of tree leaves that led Yueh-Lin (Lynn) Loo to flexible, more-efficient solar cells. Other insights are derived from sources as diverse as Namibian beetles, shark skin, and gecko feet. Invention/inspirations are presented in four-page subsections, the invention presented in the first double-page spread, with its backstory explained economically but clearly in the second. The real inventors and fictional invention users populating Boston’s stylized, cleanly drawn illustrations, including one figure who uses a wheelchair, are likewise diverse in age, race, and gender presentation. The author brings her debut to a strong finish with an overview of the study of biomimicry and helpful suggestions for activities and further reading. Of particular note is the section that introduces each inventor (all of whom Nordstrom interviewed) with a photograph; when appropriate, the inventor’s surname is placed before their given name, along with a parenthetical explanation.
A salutary reminder to young naturalists and would-be Edisons that not all wheels need to be reinvented.
—Kirkus Reviews

You and the kids will soak up mind-blowing examples of how animals and plants inspire innovations in this book about biomimicry—when inventors take strategies found in nature and adapt them into technology. One cool case: A scientist came up with a way to prevent algae from growing on submarines by studying the skin of sharks. Short text blocks and bright illustrations make this topic approachable for the pre-K set.
—Parents

This handsome book presents eight inventions inspired by nature. After watching a kingfisher dive into water, Eiji Nakatsu redesigned the nose of Japan’s Shinkansen bullet train to resemble the bird’s beak and created a significantly quieter, faster, more energy-efficient engine. Microbiologists Rusty Rodriguez and Regina Redman discovered a fungus that, when used in a treatment for seeds, allows food crops to survive despite harsh conditions. For example, a rice plant can grow in “hot, dry, salty soil.” Fascinated by flight as a boy in Nigeria, Kingsley Fregene later became a research scientist at Lockheed Martin, where he and his team invented a one-winged drone inspired by twirling maple seeds. Nordstrom, who interviewed each of the inventors introduced here, offers eight examples of biomimicry and explains each one in a few paragraphs presented on two fully illustrated, double-page spreads. In the attractive artwork, trees on the hills are represented by colorful, overlapping triangles and diamond-shaped forms. The illustrations help to clarify the link between an invention’s inspiration and its final form. An intriguing introduction to biomimicry.
—Booklist

This work invites readers to imagine how nature inspires innovative thinkers to create real-world solutions. Each mimic maker is introduced through illustrations that follow the development of a biomimicry project from nature to invention; short explanatory paragraphs are tucked into the artwork to support and expand the visual narrative. The renderings do a lot of the storytelling, giving young readers the opportunity to explore and ask questions based on what they see. Boston’s illustrations are intricate and accessible, drawing readers in for a closer look at the action. Nordstrom’s text doesn’t overwhelm the page; rather, it serves as a guidance component for questions young readers may have about the research or technology presented. This is a good book to open up and let young readers take the lead by reading the illustrations first. Adults reading along can build on initial visual readings with the provided text, generating discussions about science, nature, and technology. Mimic Makers also offers an opportunity to “meet” the makers: short biographies with photographs in the back matter identify the real-life mimic makers presented in the book. There are also suggestions for kids on how they can be mimic makers, as well as a series of resources and a bibliography for further study. VERDICT Purchase this fascinating informational text for science collections and classroom use.
—School Library Journal

Each of eight inventions is profiled over two double-page spreads; Boston's colorful, stylized illustrations take center stage, homing in on details in the brief text. Nordstrom's focus is on the inventions rather than the inventors, and coverage includes only select facts about the individuals and their work. Back matter includes a list of related jobs; small photos of, and occupations for, each of the ten mimic makers mentioned; more about biomimicry; and suggestions for becoming a mimic maker. A glossary, selected bibliography, reading list, and websites are appended.

Mimic Makers demonstrates how paying attention to details opens both understanding and innovation. This book inspires readers to look closer and ask how things work. Understanding the relationships between form and function is a catalyst to creative thinking and design. The illustrations are playful, the text engaging, the scholarship rigorous, and the message critical.
—John (Jack) Muir Laws, Wildlife Biologist, Associate of the California Academy of Sciences

Mimic Makers presents complex science and engineering topics in accessible and entertaining ways. Young readers will be captivated by the contemporary inventors and inventions featured, and inspired to incorporate biomimicry into their own designs. The vibrant illustrations strike a balance between smooth, vibrant spreads and informative, technical spot art. A must-buy for classroom libraries and makerspaces.
—Miranda Paul, author of One Plastic Bag and Water is Water

I love that this book starts with questions! Wondering and joyful experimentation is exactly what this science teacher wants kids to be doing.  Mimic Makers reveals marvels of engineering inspired by nature with images that invite careful observation and explanations that are expressive, but never over simplified.  Each scientist's story is testimony to the power of noticing patterns, structures and function, and how systems work in order to arrive at Eureka! to solve real world problems. Students can see themselves as the scientists immersed in nature, testing, analyzing, and testing some more.  Students will read this over and over and start asking their own questions. This story is STEM2 as Nordstrom shows us how scientists work and what scientists can create just because they wondered.
—Kim Parfitt, curriculum developer for Howard Hughes Medical Institute Biointeractive, and recipient of the Presidential Award for Excellence in Science and Math Teaching.