Soil and Spirit: Cultivation and Kinship in the Web of Life (Hardcover) 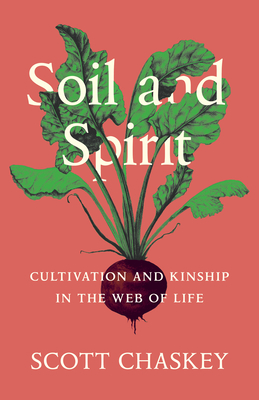 Soil and Spirit: Cultivation and Kinship in the Web of Life (Hardcover)


Coming Soon - Available for Pre-Order Now
As a farmer with decades spent working in fields, Scott Chaskey has been shaped by daily attention to the earth. A leader in the international Community Supported Agriculture (CSA) movement, he has combined a longstanding commitment to food sovereignty and organic farming with a belief that humble attention to microbial life and diversity of species provides invaluable lessons for building healthy human communities.

Along the way, between "planning the rotations of fields, ordering seeds and supplies, and watching the weather," Chaskey was "always writing, poetic stanzas or pages to piece together a book." And in this lively collection of essays, he explores the evolution of his perspective--as a farmer and as a poet. Tracing the first stage in his development back to a homestead in Maine, on the ancestral lands of the Abenaki, he recalls learning to cultivate plants and nourish reciprocal relationships among species, even as he was reading Yeats and beginning to write poems. He describes cycling across Ireland, stopping to taste blackberries and linger in the heather before meeting Seamus Heaney, and farming in Cornwall's ancient landscape of granite, bramble, and twisted trees. Later in life, he travels to China for an international conference on Community Supported Agriculture, reading ancient wilderness poetry along the way, and then on to the pueblo of Santa Clara in New Mexico, where he joins a group of Indigenous women harvesting amaranth seeds. Closer to home on the Southfork of Long Island, he describes planting redwood saplings and writing verse in the shade of an ancient beech tree.

"Enlivened by decades of work in open fields washed by the salt spray of the Atlantic"--words that describe his prose as well as his vision of connectedness--Scott Chaskey has given us a book for our time. A seed of hope and regeneration in a time of widespread despair.

Scott Chaskey is the author of Soil and Spirit. He is also the author of a memoir, This Common Ground: Seasons on an Organic Farm, and a book of nonfiction, Seedtime: On the History, Husbandry, Politics, and Promise of Seeds. His poetry, first printed in literary journals in the early seventies, has been widely published over four decades. A pioneer of the Community Supported Agriculture (CSA) movement, for thirty years he cultivated more than sixty crops for the Peconic Land Trust at Quail Hill Farm in Amagansett, New York, one of the original CSAs in the country. He is past president of the Northeast Organic Farming Association of New York and was honored as Farmer of the Year in 2013. He was a founding board member for both the Center for Whole Communities, in Vermont, and Sylvester Manor Educational Farm, in Shelter Island, New York. He taught as a poet-in-the-schools for over two decades and as an instructor for Antioch International and Friends World College in Southampton. Chaskey lives and works on the east end of Long Island, New York.