Nano: The Spectacular Science of the Very (Very) Small (Hardcover) 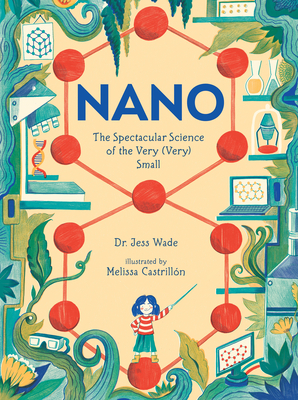 Nano: The Spectacular Science of the Very (Very) Small (Hardcover)


Usually Ships in 1-5 Days
The cutting-edge world of nanoscience leaps to life on boldly patterned pages in this STEM-ready gem.

An acclaimed physicist and debut picture-book author introduces readers to the tiny building blocks that make up the world around us. Elegant, friendly text and stylish illustrations explain atoms, the elements, and other essential science concepts and reveal how very (very) small materials are manipulated to create self-washing windows; stronger, lighter airplanes; and other wonders of nanotechnology. Further explanation in the back matter gives more detail about various scientists’ roles and the tools they use. Splashed with bright primary colors, this tribute to the tiny will inspire curious minds of every stripe.
Dr. Jess Wade is an award-winning physicist, activist, and science-communicator. Nano is her first book for children. She lives in London.

Melissa Castrillón is a British-Colombian author-illustrator with a master’s in children’s book illustration. She lives in Cambridge, England.
Castrillón’s whimsical art is intriguingly paired with the subject matter, incorporating both the explanatory and speculative, using fine lines that seem delicate but are also robust—light but muscular, just like the materials Wade describes. . . . A marvelous spark for the imagination and motivation to learn more.
—Kirkus Reviews (starred review)

Exceptionally well-organized and smoothly narrated. . . Wade proceeds from familiar around-the-house scale, down to the molecular level, and then to the mind-bending ultrathin molecular level of nanomaterials, all in terms elementary schoolers can understand. . . a treasure of a group read for teachers and students with minds wide open.
—The Bulletin of the Center for Children's Books (starred review)

An excellent book for getting young children interested in science, this supports classroom studies of matter, the work of scientists, and the possibilities of future discoveries.
—School Library Journal (starred review)

Wade, a physicist, breaks the topic down into delightful morsels, introducing young readers to the wonders of nanoscience. . . . Castrillón’s intricate illustrations are vibrant and inviting, equally adept at capturing whimsical landscapes and detailed scientific explanations. An appealing and enlightening introduction to the small parts of a big universe.
—Booklist

Wade presents her material with an appealing rhythm, and Castrillon has created whimsical images that match the hopeful spirit of the text.
—The Washington Post

Wade has a passion and reverence for the subject matter that shines. And she never speaks down to children, reminding them in the end that it might just be “YOU,” the reader, who unlocks more secrets of nanotechnology.
—Seven Impossible Things Before Breakfast