Born Curious: 20 Girls Who Grew Up to Be Awesome Scientists (Hardcover) 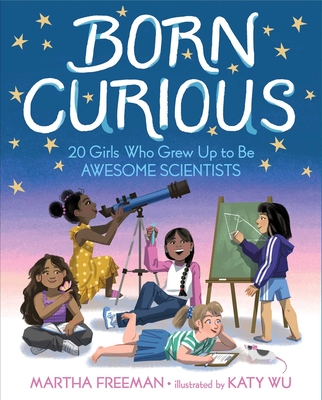 Born Curious: 20 Girls Who Grew Up to Be Awesome Scientists (Hardcover)

Why do galaxies spin the way they do?
What’s the best kind of house for a Komodo dragon?
Can you cure malaria with medicine made from a plant?

The scientists and mathematicians in Born Curious sought answers to these and many other fascinating questions. And it’s lucky for us they did. Without their vision, insight, and hard work, the world would be a sicker, dirtier, and more dangerous place.

The twenty groundbreaking women—including Rosalind Franklin, Marie Tharp, Shirley Anne Jackson, and more—came from all kinds of backgrounds and had all kinds of life experiences. Some grew up rich. Some grew up poor. Some were always the smartest kid in class. Some struggled to do well in school. But all had one thing in common: They were born curious. Are you curious, too? Read on.
Martha Freeman worked as a reporter and teacher before becoming a full-time writer of books for young readers, including the Edgar Award­–nominated Zap!, Born Curious, The Secret Cookie Club series, Who Stole Halloween?, and Effie Starr Zook Has One More Question, which School Library Journal called “accessible and exciting” in a starred review. She also collaborated with NASA astronaut Mark Kelly on the Astrotwins books. Martha lives in Colorado. Learn more at MarthaFreeman.com.

Katy Wu has worked in the animated feature film industry as a sketch artist and assistant art director, as well as in the tech industry as a “Doodler” for Google (creating the artwork and short films showcased on Google’s landing page), where she created the Google “Doodles” for Nellie Bly and Nelson Mandela. Katy currently works as a freelance art director and designer on various animation projects. She has illustrated many nonfiction books for young readers, including Dumpling Dreams by Carrie Clickard and Born Curious by Martha Freeman. Learn more at KatyCWWU.Tumblr.com.
A collective biography of 20 groundbreaking women in science. Arranged chronologically, the compilation begins with Ellen Swallow Richards, a white geochemist born in 1842, who not only became the first woman to earn a degree in chemistry in the U.S., but used her research in nutrition, sanitation, and health to establish the first school-lunch program and first water-quality standards in the country. A few women who follow, such as Sylvia Earle, may be recognizable, but most will be new to readers. Each profile starts with an anecdote that describes the scientist’s childhood influences in the present tense before switching to the past tense to focus on her professional accomplishments and impact on science. A full-page portrait with clues to each woman’s focus and a concluding roundup of her major achievements, a reflective quote, and a “fascinating fact” accompany the profile as well. Freeman aims for diversity in both the range of disciplines covered and in the scientists themselves, who include Chinese pharmacologist Tu Youyou, African American physicist Shirley Ann Jackson, and Colombian geologist Adriana Ocampo. While the thematic emphasis, as the title suggests, is on the curiosity that drove each woman to pursue science, the profiles also highlight the role failure played in their paths and how they overcame such challenges as sexism, racism, illness, and disability to reach their goals. An inspiring look at women who realized curiosity plus tenacity equals success. (afterword, glossary, source notes) (Collective biography. 8-12)
— Kirkus Reviews

Gr 3-5–Freeman shares 20 short biographies of women scientists—from geologists and molecular biologists to mathematicians and all the disciplines in between. The author finds a common thread between all of them: They were born curious. But it wasn’t enough to simply be born curious. These scientists had obstacles and challenges to overcome. Each woman dealt with societal barriers that could have derailed their studies. Geochemist Ellen Swallow Richards (1842–1911) overcame poverty and sexism. Physicist Shirley Ann Jackson (born in 1946) was the first African American woman to earn a doctorate from the Massachusetts Institute of Technology (MIT). While at MIT, Jackson started the Black Student Union and became a passionate advocate for equal education, which continues to define her life’s work. The biography of Iranian mathematician and professor Maryam Mirzakhani (1977–2017) highlights the struggle of surviving a war and living with a terminal illness. Readers will learn that intelligence is only one factor of success and that hard work and persistence are also required. VERDICT These stories may help motivate readers to channel their curiosity into deeper scholarship and become the next generation of inspirational women of science and math.–Elaine Baran Black, Georgia Public Library Service, Atlanta
— School Library Journal

Few of the women in this captivating compendium are household names: Joan Beauchamp Proctor “pioneered humane design for zoo habitats”; Tu Youyou, a pharmacologist, used traditional Chinese medicine to develop a treatment for malaria; and Ingrid Daubechies’s wavelet theory led to image compression technology. Freeman uses direct quotations and childhood anecdotes (of Daubechies: “The girl likes making doll clothes because she likes solving problems”) to convey character, an approach amplified by Wu’s stylized portraits, which incorporate references to each woman’s work (climate scientist Susan Solomon gazes over snowy mountaintops; a rat peers over neuroscientist May-Britt Moser’s book). Each scientist receives a dedicated chapter that closes with a quote, a “fascinating fact,” and an achievement summary, and Freeman’s afterword offers 13 lessons to be gleaned from their stories, notably: “be curious about science and everything else.” Supplemental materials include a glossary, sources, and index. Ages 7–12. (Feb.)