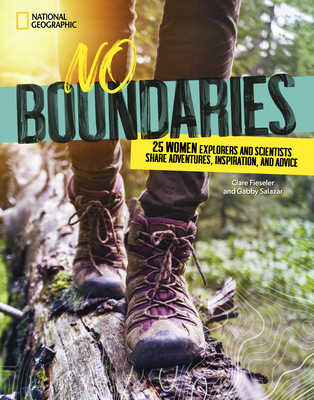 
Usually Ships in 1-5 Days
Meet 25 female explorers and scientists in these inspirational and poignant stories of exploration, courage, and girl power.

Along the way, they share lessons learned and words of wisdom sure to inspire the next generation of scientists, adventurers, and world-changers.

Track a volcanologist as she braves the elements atop an active volcano. Travel alongside a mountaineer as she battles stereotypes—and frostbite—to conquer the famed Seven Summits. Join a conservationist on her passionate fight to save lions. Dig with a paleontologist to uncover massive dinosaur fossils, bit by breathtaking bit. These heartfelt stories give readers an insider’s look at the amazing work female explorers at National Geographic—and beyond—are doing in the field to solve some of the world’s toughest problems.

Rather than detailing the lives of well-known women, this anthology celebrates lesser-known changemakers and outstanding women of diverse backgrounds, nationalities, and fields of study who are just beginning to make a name for themselves. Each profile is based on first-person interviews and comes paired with useful tips and relatable advice for budding explorers and scientists. Stunning photography and fascinating general interest information about the animals, places, and practices add drama and context.

No Boundaries sends a positive message to every girl who has ever dreamed or dared to go a little further. And although these explorers’ endeavors are quite adventurous, the lessons they share can inspire all girls, as well as boys, whatever their goals, skills, and interests.
CLARE FIESELER is a National Geographic explorer, photojournalist, and conservation biologist. She has conducted field research on coral reefs and island ecology across the Caribbean and wider Atlantic Ocean. She also studies urban wildlife in her home city of Washington, D.C. As a journalist, Fieseler has traveled the globe, reporting on emerging environmental problems for the Washington Post, NPR, and National Geographic, among other outlets. She was awarded the 2019 Mass Media Fellowship from the American Association for the Advancement of Science. Fieseler is most proud of the time she rappelled down a rock cliff with a broken foot to photograph the world’s most endangered fern. She can be followed on Instagram and Twitter at @clarefieseler.

GABBY SALAZAR is a National Geographic explorer, a nature and conservation photographer, and a social scientist. As a U.S. Fulbright Scholar in Photography and an associate fellow of the International League of Conservation Photographers, she has worked on environmental photography projects across the globe, spending months at a time living in tropical rainforests and on tropical islands. Salazar has an MSc in Conservation Science from Imperial College London and is currently a doctoral student at the University of Florida’s School of Forest, Fisheries, and Geomatics Science, where she studies environmental marketing. She is committed to environmental education and uses photography to get kids outdoors and to connect them with nature. Her website is gabbysalazar.com, and she can be followed on Instagram and Twitter at @gabbyrsalazar.