The Mimicking of Known Successes (Hardcover) 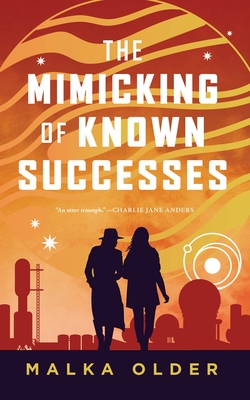 The Mimicking of Known Successes (Hardcover)

The Mimicking of Known Successes presents a cozy Holmesian murder mystery and sapphic romance, set on Jupiter, by Malka Older, author of the critically-acclaimed Centenal Cycle.

“Every once in a while, a book comes along that is both a comfort read and a rousing, fist-pumping adventure, and The Mimicking of Known Successes absolutely is both of those things. An utter triumph.”—Charlie Jane Anders

A Most Anticipated in 2023 Pick for Today.com | Buzzfeed | Polygon | Book Riot | Ms. Magazine

On a remote, gas-wreathed outpost of a human colony on Jupiter, a man goes missing. The enigmatic Investigator Mossa follows his trail to Valdegeld, home to the colony’s erudite university—and Mossa’s former girlfriend, a scholar of Earth’s pre-collapse ecosystems.

Pleiti has dedicated her research and her career to aiding the larger effort towards a possible return to Earth. When Mossa unexpectedly arrives and requests Pleiti’s assistance in her latest investigation, the two of them embark on a twisting path in which the future of life on Earth is at stake—and, perhaps, their futures, together.

Malka Older is a writer, aid worker, and sociologist. Her science-fiction political thriller Infomocracy was named one of the best books of 2016 by Kirkus Reviews, Book Riot, and The Washington Post. She is the creator of the serial Ninth Step Station, currently running on Realm, and her short story collection And Other Disasters came out in November 2019. She is a Faculty Associate at Arizona State University’s School for the Future of Innovation in Society and teaches in the genre fiction MFA at Western Colorado University. Her opinions can be found in The New York Times, The Nation, and Foreign Policy, among others.

“Every once in a while, a book comes along that is both a comfort read and a rousing, fist-pumping adventure, and The Mimicking of Known Successes absolutely is both of those things. An utter triumph.”—Charlie Jane Anders

"Older has created a wonderfully sci-fi take on the gaslamp mystery. Add in the wry depiction of academia and the warmly authentic portrayal of a relationship in the process of rekindling, and this is exactly my kind of story!"—Freya Marske

"A magnificently imaginative setting, a nicely developed and satisfyingly resolved mystery, a beautifully understated central romance, and a lot of thought-provoking ideas make this an immensely satisfying read [that] does more at novella length than many books manage in three times as much."—K. J. Charles

“Malka Older has created a far-flung speculative winner that is as much hard science fiction as it is gritty xenobiological noir, with characters you want to see get closer. . .to the possible killer and each other. I am absolutely in love with this world and these characters.”—Fran Wilde

“Malka Older's The Mimicking of Known Successes mixes Holmesian mystery, Sapphic romance, petty academic politics, and post-apocalyptic speculative ecology into a delightful and unexpected concoction. The perfect book to curl up with when the wind is howling outside, even if it's only a Terran blizzard rather than a Jovian superstorm.”—Ruthanna Emrys

"It’s hard to pull off a novel that attempts to have equal footing in two genres—never mind three—and typically one of the genres ends up taking on a minor role . . . but The Mimicking of Known Successes, a work of speculative fiction, a traditional mystery, and a romance, is a walloping success."—First Clue, starred review

"This quiet yet compelling whodunit will attract fans of Becky Chambers or Connie Willis."—Booklist (starred review)

"Older packs a punch in this slim volume, delivering a romantic sci-fi mystery replete with ruminations on environmentalism and the importance of adapting to change. . . . Combining an old-timey aesthetic and a powerful message, this sapphic genre bender is a treat."—Publishers Weekly, starred review

"Reading this novella was an absolute delight . . . I can imagine further stories set in this world; if I’m very lucky, they will feature Mossa and Pleiti."—Locus

"Recommended for readers who enjoy a bit of mystery mixed with their SF . . . and anyone who cannot resist a Sherlock Holmes pastiche."—Library Journal