Molly on the Moon (Hardcover) 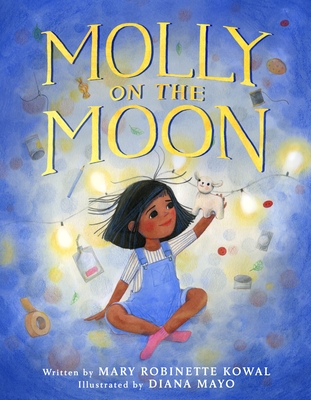 Molly on the Moon (Hardcover)

A big sister finds that even in a place as lonely as the moon, all you need is a little creativity—and someone to play with—in Molly on the Moon, the debut picture book from award winning sci fi author Mary Robinette Kowal.

When Molly and her family move to the moon, they can only pack the essentials—just one toy each for Molly and her baby brother, Luke.

Luckily, Molly has a big imagination. A packing crate becomes a fort, a tarp becomes a witch’s cape, and some cans become a tea set. Baby Luke, on the other hand . . . has blocks.

Molly doesn’t want to share. At first. But then she realizes that when you’re on the moon—or anywhere else—a big imagination and being with someone you love can be infinitely better than all the toys in the universe.

Mary Robinette Kowal is the author of the Hugo, Nebula, and Locus Award-winning alternate history novel The Calculating Stars, the first book in the Lady Astronaut series which continues with The Relentless Moon. She is also the author of The Glamourist Histories series and Ghost Talkers and has received the Astounding Award for Best New Writer, four Hugo Awards, the Nebula and Locus Awards. Her stories appear in Asimov’s, Uncanny, and several Year’s Best anthologies. Mary Robinette has also worked as a professional puppeteer, is a member of the Award-winning podcast Writing Excuses, and performs as a voice actor (SAG/AFTRA), recording fiction for authors including Seanan McGuire, Cory Doctorow, and Neal Stephenson. She lives in Nashville with her husband Rob and over a dozen manual typewriters.

Diana Mayo is an illustrator based in Chelmsford, near London. She enjoys working across the publishing, design and editorial industries. Picture books she has illustrated include Yawning Yoga by Laurie Jordan, The End Is Just the Beginning by Mike Bender, and Snow Ghost by Tony Mitton. She runs the Just Imagine Illustrators Group, exhibits her illustration work and has recently turned her creative hand to making illustrated ceramics.