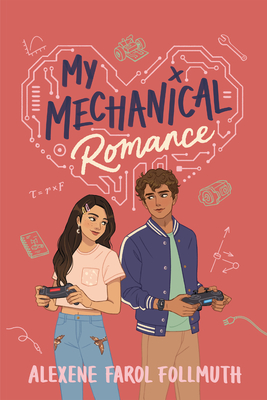 
Usually Ships in 1-5 Days
Opposites attract in this battle-robot-building YA romance from the NYT best-selling author of The Atlas Six.

"Hilarious, heartfelt, and positively banterific."—Monica Gomez-Hira, author of Once Upon a Quinceañera

Bel would rather die than think about the future. College apps? You’re funny. Extracurriculars? Not a chance. But when she accidentally reveals a talent for engineering at school, she’s basically forced into joining the robotics club. Even worse? All the boys ignore Bel—and Neelam, the only other girl on the team, doesn't seem to like her either.

Enter Mateo Luna, captain of the club, who recognizes Bel as a potential asset—until they start butting heads. Bel doesn’t care about Nationals, while Teo cares too much. But as the nights of after-school work grow longer and longer, Bel and Teo realize they've made more than just a combat-ready robot for the championship: they’ve made space for each other and themselves.

In her YA debut, Alexene Farol Follmuth, author of The Atlas Six (under the penname Olivie Blake), explores both the challenges girls of color face in STEM and the vulnerability of first love with unfailing wit and honesty. With an adorable, opposites-attract romance at its center and lines that beg to be read aloud, My Mechanical Romance is swoonworthy perfection.


Alexene Farol Follmuth is a first-generation American, a romance enthusiast, and a lover and writer of stories. Alexene has penned a number of adult SFF projects under the name Olivie Blake, including the webtoon Clara and the Devil and the New York Times best seller and BookTok-viral The Atlas Six. My Mechanical Romance is her YA debut. She lives in Los Angeles with her husband, new baby, and rescue pit bull. Find her at alexenefarolfollmuth.com.
"The characters' struggles are realistic, and the romantic chemistry is palpable, making this a joyful read."—Publishers Weekly

"The message is clear: Women deserve to take up space in the STEM world too. A delightful teen romance about building robots—and new futures."—Kirkus Reviews

"My Mechanical Romance shines a light on the struggles bright young girls face in STEM fields, and combines it with an adorable romance that will leave you warm and smiling long after the last page. It’s romcom perfection."—Adiba Jaigirdar, author of The Henna Wars, a TIME’s 100 Best YA Books of All Time

"Hilarious, heartfelt, and positively banterific, My Mechanical Romance is a can’t-miss debut. Bel and Teo are two brilliant teens whose snarky chemistry leaps off the page, even as they slowly reveal the layers of their hearts—Bel’s struggle to be taken seriously as a girl of color in STEM, and Teo’s fear that he’ll never live up to everyone’s sky-high expectations. Bel and Teo don’t just build kick-ass robots; they create a beautiful organic love story that helps them both discover all the best versions of themselves. I swooned, I cheered, and I will definitely read everything else Alexene Farol Follmuth writes!" —Monica Gomez-Hira, author of Once Upon a Quinceañera