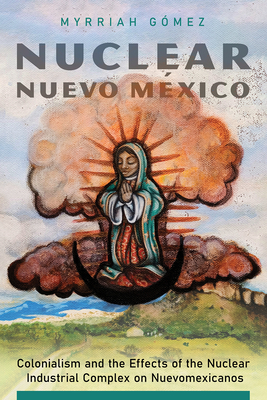 
Backordered
In the 1940s military and scientific personnel chose the Pajarito Plateau to site Project Y of the secret Manhattan Project, where scientists developed the atomic bomb. Nuevomexicanas/os and Tewa people were forcibly dispossessed from their ranches and sacred land in north-central New Mexico with inequitable or no compensation.

Contrary to previous works that suppress Nuevomexicana/o presence throughout U.S. nuclear history, Nuclear Nuevo México focuses on recovering the voices and stories that have been lost or ignored in the telling of this history. By recuperating these narratives, Myrriah Gómez tells a new story of New Mexico, one in which the nuclear history is not separate from the collective colonial history of Nuevo México but instead demonstrates how earlier eras of settler colonialism laid the foundation for nuclear colonialism in New Mexico.

Gómez examines the experiences of Nuevomexicanas/os who have been impacted by the nuclear industrial complex, both the weapons industry and the commercial industry. Gómez argues that Los Alamos was created as a racist project that targeted poor and working-class Nuevomexicana/o farming families, along with their Pueblo neighbors, to create a nuclear empire. The resulting imperialism has left a legacy of disease and distress throughout New Mexico that continues today.

Myrriah Gómez is a Nuevomexicana from the Pojoaque Valley. She is an assistant professor in the Honors College at the University of New Mexico.

“Nuclear Nuevo México foregrounds the people most impacted by the development of the nuclear industry in New Mexico—the local communities whose lives and livelihoods were forever changed by the Manhattan Project and the nuclear era it initiated. Urgent and compelling, this study challenges readers to confront the racialized borders of our nuclear past, present, and future.”—Anita Huizar-Hernández, author of Forging Arizona: A History of the Peralta Land Grant and Racial Identity in the West

“Gómez offers a much-needed history based on the voices of the people whose lives and lands were stolen in the name of nuclear research. You have heard about Oppenheimer and Fermi and other scientists, but what about the farmers and the laborers whose worlds were changed by the lab? What about their descendants and the ongoing illnesses and contamination of the land? Learn about it in this book written from the heart of the community.”—Priscilla Solis Ybarra, author of Writing the Goodlife: Mexican American Literature and the Environment