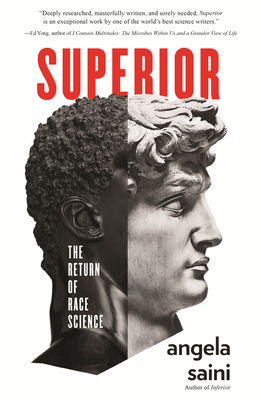 An astute and timely examination of the re-emergence of scientific research into racial differences.

Superior tells the disturbing story of the persistent thread of belief in biological racial differences in the world of science.

After the horrors of the Nazi regime in World War II, the mainstream scientific world turned its back on eugenics and the study of racial difference. But a worldwide network of intellectual racists and segregationists quietly founded journals and funded research, providing the kind of shoddy studies that were ultimately cited in Richard Herrnstein and Charles Murray’s 1994 title The Bell Curve, which purported to show differences in intelligence among races.

If the vast majority of scientists and scholars disavowed these ideas and considered race a social construct, it was an idea that still managed to somehow survive in the way scientists thought about human variation and genetics. Dissecting the statements and work of contemporary scientists studying human biodiversity, most of whom claim to be just following the data, Angela Saini shows us how, again and again, even mainstream scientists cling to the idea that race is biologically real. As our understanding of complex traits like intelligence, and the effects of environmental and cultural influences on human beings, from the molecular level on up, grows, the hope of finding simple genetic differences between “races”—to explain differing rates of disease, to explain poverty or test scores, or to justify cultural assumptions—stubbornly persists.

At a time when racialized nationalisms are a resurgent threat throughout the world, Superior is a rigorous, much-needed examination of the insidious and destructive nature of race science—and a powerful reminder that, biologically, we are all far more alike than different.
Angela Saini is an award-winning science journalist whose print and broadcast work has appeared on the BBC and in the Guardian, New Scientist, Wired, the Economist, and Science. A former Knight Science Journalism Fellow at MIT, she won the American Association for the Advancement of Science’s Kavli Science Journalism gold award in 2015. Saini has a master’s in engineering from Oxford University, and she is the author of Inferior: How Science Got Women Wrong and the New Research That’s Rewriting the Story and Geek Nation: How Indian Science Is Taking Over the World.
“An important and timely reminder that race is ‘a social construct’ with ‘no basis in biology.’”
—Kirkus Reviews, Starred Review

“[A] brilliant critique of ‘race science’ . . . this is an important and, in an era of rising racial tensions, must-read book, especially for those most sure they do not need to read it.”
—Publishers Weekly

“Superior: The Return of Race Science makes the compelling case that scientific racism is as prevalent as it has ever been, and explores the way such backward beliefs have continued to evolve and persist. And it couldn’t be more timely.”
—Bitch

“A rigorously researched and reported journey from the Enlightenment through nineteenth-century imperialism and twentieth-century eugenics to the stealthy revival of race science in the twenty-first century.”
—Financial Times

“In Superior, Saini expertly chronicles the broader social forces that have reinvigorated race science . . . . For such a weighty topic, Superior is a surprisingly easy-to-read blend of science reporting, cultural criticism, and personal reflection.”
—Slate

“Whether you think of racist science as bad science, evil science, alt-right science, or pseudoscience, why would any contemporary scientist imagine that gross inequality is a fact of nature, rather than of political history? Angela Saini’s Superior connects the dots, laying bare the history, continuity, and connections of modern racist science, some more subtle than you might think. This is science journalism at its very best!”
—Jonathan Marks, author of Tales of the Ex-Apes: How We Think About Human Evolution

“Angela Saini’s investigative and narrative talents shine in Superior, her compelling look at racial biases in science past and present. The result is both a crystal-clear understanding of why race science is so flawed, and why science itself is so vulnerable to such deeply troubling fault lines in its approach to the world around us—and to ourselves.”
—Deborah Blum, author of The Poison Squad: One Chemist’s Single-Minded Crusade for Food Safety at the Turn of the Twentieth Century

“Some writers have tackled the sordid history of race science previously, but none have gone so deep under the skin of the subject as Angela Saini in Superior. In her deceptively relaxed writing style, Saini patiently leads readers through the intellectual minefields of ‘scientific’ racism. She plainly exposes the conscious and unconscious biases that have led even some of our most illustrious scientists astray.”
—Michael Balter, author of The Goddess and the Bull

“In this essential book, Angela Saini deftly shows how science and racism have long been intertwined, why that pernicious history continues to this day, and why ‘race science’ is so deeply flawed. Deeply researched, masterfully written, and sorely needed, Superior is an exceptional work by one of the world’s best science writers.”
—Ed Yong, author of I Contain Multitudes: The Microbes Within Us and a Grander View of Life

“Angela Saini’s Superior: The Return of Race Science is nothing short of a remarkable, brilliant, and erudite exploration of what we believe about the racialized differences among our human bodies. Saini takes readers on a walking tour through science, art, history, geography, nostalgia and personal revelation in order to unpack many of the most urgent debates about human origins, and about the origin myths of racial hierarchies. This beautifully written book will change the way you see the world.”
—Jonathan Metzl, author of Dying of Whiteness