The Kitchen Pantry Scientist Math for Kids: Fun Math Games and Activities Inspired by Awesome Mathematicians, Past and Present; with 20+ Illustrated Biographies of Amazing Mathematicians from Around the World (Paperback) 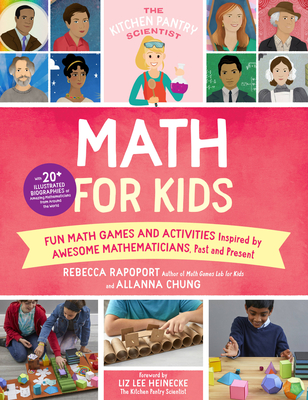 The Kitchen Pantry Scientist Math for Kids: Fun Math Games and Activities Inspired by Awesome Mathematicians, Past and Present; with 20+ Illustrated Biographies of Amazing Mathematicians from Around the World (Paperback)


Usually Ships in 1-5 Days
Math for Kids, the fourth book of The Kitchen Pantry Scientist series, brings math to life through biography and creative engagement.

Go beyond counting. Solve puzzles, learn a magic trick, and play a ton of games.

This engaging guide offers a series of snapshots of 20+ mathematicians, from ancient history through today, paired with related hands-on projects perfect for a kitchen or a classroom. Each lab tells the story of a mathematician along with some background about the importance of their work, and a description of where it is still being used or reflected in today’s world.

A step-by-step illustrated game or activity paired with each story offers kids an opportunity to engage directly with concepts the mathematicians pursued, or are working on today. Experiments range from very simple projects using materials you probably already have on hand, to more complicated ones that may require a few inexpensive items you can purchase online. Just a few of the incredible people and scientific concepts you’ll explore:

With this fascinating, hands-on exploration of the history of mathematics, inspire the next generation of great mathematicians.

Rebecca Rapoport holds degrees in mathematics from Harvard University and Michigan State. From her first job out of college, as one of the pioneers of Harvard’s Internet education offerings, she has been passionate about encouraging her love for math in others. As an early contributor to both retail giant Amazon.com and Akamai Technologies, the number one firm in cloud computing, Rapoport played a key role in several elements of the Internet revolution. She then returned to her first love, education, as an innovator of new methods to introduce children and adults to the critically important world of STEAM education as COO of an enrichment center dedicated to helping kids explore the creative side of science, technology, engineering, art, and math, and is currently developing and teaching innovative math curricula in the Boston area. Rapoport is also the co-author of Math Games Lab for Kids (published by Quarry Books), a book of fun, hands-on math activities designed to introduce elementary and middle-school students to several areas of higher math; and the calendars Mathematics: Your Daily Epsilon of Math 2021,​ Mathematics: Your Daily Epsilon of Math 2020, Mathematics 2019: Your Daily Epsilon of Math, and The Mathematics Calendar 2018, all published by Rock Point. She has an Erdös number of 2.

Liz Lee Heinecke has loved science since she was old enough to inspect her first butterfly. After working in molecular biology research for 10 years and earning her master’s degree, she left the lab to kick off a new chapter in her life as a stay-at-home mom. Soon, she found herself sharing her love of science with her three kids as they grew, chronicling their science adventures on her KitchenPantryScientist website. Her desire to share her enthusiasm for science led to regular television appearances, an opportunity to serve as an Earth Ambassador for NASA, and the creation of an iPhone app. Her goal is to make it simple for parents to do science with kids of all ages, and for kids to experiment safely on their own. Liz graduated from Luther College and received her master’s degree in bacteriology from the University of Wisconsin, Madison. She is the author of Kitchen Science Lab for Kids, Kitchen Science Lab for Kids: Edible Edition, Outdoor Science Lab for Kids, STEAM Lab for Kids, Sheet Pan Science, and Little Learning Labs: Kitchen Science for Kids. Her namesake series, The Kitchen Pantry Scientist, pairs illustrated biographies with engaging hands-on activities inspired by their work. The books in that series include: Chemistry for Kids, Biology for Kids, Physics for Kids, and Math for Kids.

Allanna Chung is an aspiring screenwriter with a deep passion for math. One of her favorite pastimes is to show just how fun and beautiful math can be to those who have learned to dislike it. She works as a teacher of STEM and as a personal tutor to help students learn math in ways that work for them.

Kelly Anne Dalton is a professional artist and illustrator living in the wild mountains of Montana. Working from her charming 1920s studio, Kelly Anne loves creating a wide range of work, from children’s books to decorative greeting cards and gifts. Growing up with a biologist mother, Kelly has had an appreciation for science and nature her entire life, and because of that, she enjoys creating the portraits for the Kitchen Pantry Scientist series. When not drawing, Kelly Anne can be found trail running in the forest, playing with her dogs, and adventuring with her husband.

As a math teacher, I know that sometimes we just can't learn a concept unless we see it in action. Rapoport and Chung's book brings math into life with easy-to-build demonstrations. I can't wait to implement these in my classroom!—Sarah Thomas, Secondary Mathematics Teacher, Dr. Martin Luther King Jr. Early College (Denver, CO)

These stories make the math real in such important ways, and accessible sources like this one are rare. That this book combines herstories and histories with fun, interesting mathematical tasks is icing on the pi.—Jan McDonald, Former Dean and Professor, School of Education (Pace and Phillips universities)