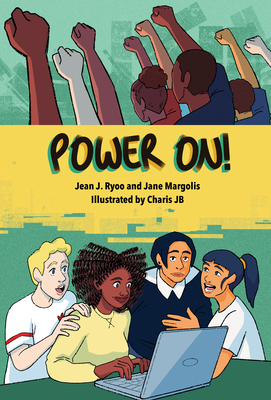 
Usually Ships in 1-5 Days
A diverse group of teenage friends learn how computing can be personally and politically empowering and why all students need access to computer science education.

This lively graphic novel follows a diverse group of teenage friends as they discover that computing can be fun, creative, and empowering. Taylor, Christine, Antonio, and Jon seem like typical young teens—they communicate via endless texting, they share jokes, they worry about starting high school, and they have each other’s backs. But when a racially-biased artificial intelligence system causes harm in their neighborhood, they suddenly realize that tech isn’t as neutral as they thought it was. But can an algorithm be racist? And what is an algorithm, anyway?

In school, they decide to explore computing classes, with mixed results. One class is only about typing. The class that Christine wants to join is full, and the school counselor suggests that she take a class in “Tourism and Hospitality” instead. (Really??) But Antonio’s class seems legit, Christine finds an after-school program, and they decide to teach the others what they learn. By summer vacation, all four have discovered that computing is both personally and politically empowering.

Interspersed through the narrative are text boxes with computer science explainers and inspirational profiles of people of color and women in the field (including Katherine Johnson of Hidden Figures fame). Power On! is an essential read for young adults, general readers, educators, and anyone interested in the power of computing, how computing can do good or cause harm, and why addressing underrepresentation in computing needs to be a top priority.
Jean J. Ryoo (she/her) is an avid reader of manga and manhwa, as well as an educational researcher/writer committed to ensuring all students experience meaningful and empowering learning, both in and out of school. Jane Margolis is a UCLA educational researcher and author who has been a longtime advocate for ending inequality and segregation in computer science education, for which she won the 2016 White House Champion of Change award. Charis JB (she/her) is a Black-biracial Latinx artist whose work often centers around issues related to race and gender equality, sexual identity, class, and more.

"Informative, impactful. . . . The authors deftly weave factual information . . . in with the computer science narrative, and the texture of teenage life in the early 2020s: quizzes, parental pressure, Black Lives Matter protests, bullying, family strife, a Juneteenth barbecue, crushes, and frustrations. They come to know, and show the reader, the importance of diversity in the computer science field, and the empowerment involved in not only understanding it but moving the field forward."
—Nina MacLaughlin, The Boston Globe

"Power On! is a fresh read from the otherwise superhero, fantasy, and science fiction stories that majorly fill this [comic book and graphic novel] space. In fact, the writers have created a group of heroes in their own right, just without all the multi-million-pound gadgets and special powers, that could hopefully inspire potential young readers… It’s about time that things begin to change, and graphic novels like these are a step in the right direction."
—E&T Magazine

“What a cool concept: This new graphic novel follows four friends who use computer science to make the tech world—and the world more broadly—a fairer, more equitable place. Make sure to share it with a young person in your life.”
—Melinda French Gates