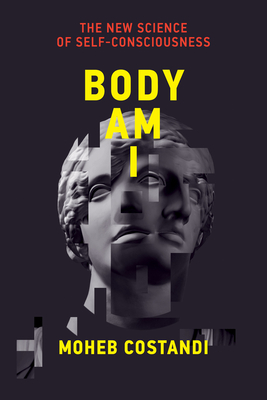 The body is central to our sense of identity. It can be a canvas for self-expression, decorated with clothing, jewelry, cosmetics, tattoos, and piercings. But the body is more than that. Bodily awareness, says scientist-writer Moheb Costandi, is key to self-consciousness. In Body Am I, Costandi examines how the brain perceives the body, how that perception translates into our conscious experience of the body, and how that experience contributes to our sense of self. Along the way, he explores what can happen when the mechanisms of bodily awareness are disturbed, leading to such phenomena as phantom limbs, alien hands, and amputee fetishes.

Costandi explains that the brain generates maps and models of the body that guide how we perceive and use it, and that these maps and models are repeatedly modified and reconstructed. Drawing on recent bodily awareness research, the new science of self-consciousness, and historical milestones in neurology, he describes a range of psychiatric and neurological disorders that result when body and brain are out of sync, including not only the well-known phantom limb syndrome but also phantom breast and phantom penis syndromes; body integrity identity disorder, which compels a person to disown and then amputate a healthy arm or leg; and such eating disorders as anorexia.

Wide-ranging and meticulously researched, Body Am I (the title comes from Nietzsche’s Thus Spoke Zarathustra) offers new insight into self-consciousness by describing it in terms of bodily awareness.
Moheb Costandi, trained as a neuroscientist, is a science writer based in London whose work has appeared in publications including Nature, Science, New Scientist, and Scientific American. He is the author of Neuroplasticity (MIT Press) and 50 Human Brain Ideas You Really Need to Know.
"[An] illuminating and detailed investigation . . . Costandi’s fascinating study reveals the astonishingly subtle and intricate relationship that exists between our brains and our bodies, and shows how fragile – but also how wondrous – our sense of self really is.”
– The Guardian